Charles is based in Weightmans’ London office and joins the firm from Shepherd & Wedderburn. He has a wealth of experience in disputes relating to finance and insolvency and represents financial institutions, corporate clients and insolvency practitioners. He has acted for an international property developer involving a high profile shareholder dispute regarding the ownership of a Premier League football club and was instructed by the Insolvency Service in relation to progressing director disqualification proceedings and public interest winding up petitions. He also advised on the first compensation order application under the Company Directors Disqualification Act 1986. 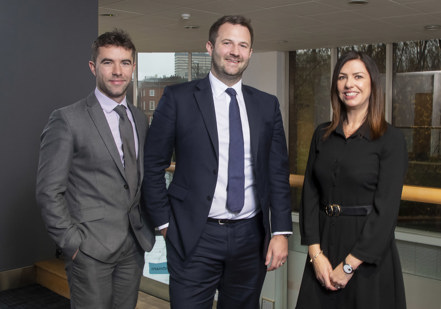 Charles (pictured centre) joins Partners Natasha Atkinson, James Moore and Oliver Nelson in the firm’s national restructuring and insolvency team, who have advised on a number of high profile cases this year.

Recent examples include dealing with the self-invested personal pension provider GPC Sipp, which entered into administration earlier this year embroiled in hundreds of customer claims which the team sold to Hartley Pensions Limited.

The team also acted on the pre-pack administration sale of Khaadi Fashions, a financially troubled Asian clothing retailer. The deal last month saved the core of the business saving up to 100 jobs at six of its 10 shopping centre stores across England.

“We have made great strides in the UK restructuring and insolvency sector in recent months, handling a range of high profile restructurings and pre-packs and demonstrating the strength of the team in particular on FCA regulated insolvencies, as well as offshore, energy-sector, football and retail administrations.

“Charles is a highly-respected leader in his field. He is dynamic, intuitive and incredibly experienced and we are delighted that he has joined us to help with our bold plan for further growth.”

“Weightmans came to my attention as an ambitious and innovative firm, with a high performing restructuring and insolvency team which is highly respected in the market.

“I am excited by Weightmans’ impressive strategy for future growth and look forward to being a part of those plans, working with Natasha and the team as well as colleagues across the UK to further develop and strengthen our offering.”