The news comes as Weightmans marks five years in its West George Street office in Glasgow,

Law firm Weightmans has further strengthened its Scottish offering with the appointment of three new Partners, taking the number of arrivals to the UK firm’s Glasgow office in recent months to seven. 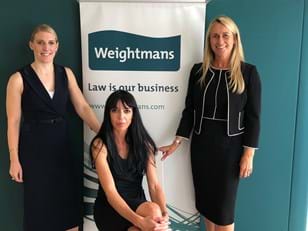 The news comes as Weightmans marks five years in its West George Street office in Glasgow, with the team growing almost sevenfold in that time and its turnover in Scotland increasing by over 300% since its first year in business.

Claire Thornber (left) joins the firm from Pinsent Masons, where she was Senior Associate in the Litigation team. She has broad experience of commercial and property litigation, serving a primarily corporate client base. Claire has also been a solicitor advocate since 2014, conducting cases in the Sheriff Courts and the Court of Session.

Nicola Gonnella (centre) was formally Legal Manager at Hutchison 3G UK. She has extensive commercial contract and negotiation experience in a range of sectors, both public and private. She will work closely with Weightmans’ national Commercial team on work spanning technology matters, outsourcing, procurement and issues around GDPR.

Claire McCracken (right) is a corporate lawyer, recommended in the Legal 500 for her work acting for a large number of companies and organisations. Joining from Lindsays, Claire brings a  particular expertise in sports law, having acted for a number of major sporting organisations.

They join Louise Welsh, Jonathan Giblin, Carolyn Bowie and Hamaad Khalid who have all joined the Glasgow office in 2018 in trainee, solicitor and associate roles.

Partner and Head of the Glasgow office Elaine McIlroy said:

"It’s an exciting time for Weightmans – we have achieved a great deal in the last five years and are enjoying a period of exceptional growth; fostering new and exciting client relationships as we continue to develop our Scottish practice.

"All of our new recruits have brought specialists skills that have further strengthened our offering. They also share an unrivalled commitment to client care and we are delighted to have them on board."