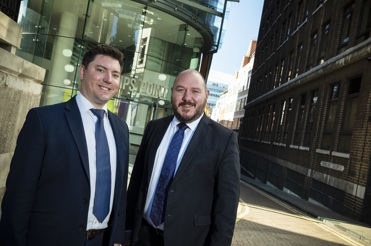 Based in the Weightmans’ Birmingham office, Daniel (left) and Richard (right) have a client base which spans the breadth of the UK, with particular experience in advising clients both in the UK and internationally, with particular focuses in the Midlands, London and Manchester.

Daniel Barchet specialises in construction and engineering transactions and disputes, acting for a wide variety of clients across the public and private sector. He trained and qualified at Eversheds and also worked as a Solicitor at Gately before moving to Squire Patton Boggs in 2013.

He has advised a series of high profile clients including acting for Manchester City FC regarding the expansion of stands of the Etihad stadium, and for a top UK television studio in a circa £10m claim for losses arising from structural design defects in the new set for a leading UK soap opera.

Daniel also has a wealth of experience acting for utility companies including Midlands-based Severn Trent Water, as well as working for international clients such as Tus-Holdings, a Chinese high-tech company, on a joint venture with Trinity College Cambridge for a new £200m phase of investment and renewal in Cambridge Science Park, including 350,000 sq ft of office/research space over five new buildings and a state-of-the-art Biohub housing laboratories, as well as offices for start-up biotech and medtech companies.

Richard Vaughan is experienced in contentious and non-contentious construction law and regularly advises universities, local authorities, emergency services and government in relation to major projects. He worked at Squire Patton Boggs from 2012 and prior to that, was part of the construction and engineering team at DLA Piper.

A specialist in development and development financing, he has previously worked with the Ministry of Defence on a Private Finance Initiative (PFI) scheme, as well as most of the UK’s major banks and developers. In the Midlands, Richard acted for Birmingham City Council on the £300m redevelopment of New Street Station and again for them on their joint venture to create Paradise Birmingham, the £500m mixed use development encompassing office, retail and public space.

In the North West, Richard also acted for ITV Studios in drafting and negotiating all the construction contracts relating to the new Coronation Street set.

At Weightmans, Richard and Daniel will support the growth of the national construction business; bringing in interesting work, attracting new talent and creating a multi-faceted commercial offering for clients. They are currently working on high profile cases such as the £260m electrification project for the rail line between London and Kettering and a £78m highway joint venture project Walsall Council and Highways England. They have also recently been instructed on a £75m development financing fund and a £100m development in London and a science park in the east Midlands.

“Richard and Daniel have joined our growing construction team during a very busy year for the firm. They are a great team; very well known in the local business communities they operate in with a strong client base and network both in the Midlands and the wider UK market - a testament to their hard work and commitment to the industry.

“Their approach combines all elements of construction law and wider commercial needs of clients to ensure we aren’t just a firm of lawyers, but facilitators of business. We are delighted to have them both on board.”