Weightmans is supporting Manchester UNESCO City of Literature’s Festival of Libraries, sponsoring its ‘Look for a Book’ initiative fronted by Sir…

Sir Lenny’s book The Boy With Wings came to Manchester in May as part of a borough-wide book hunt, where 500 copies of the book were hidden and found by children across Greater Manchester.  The Look for a Book initiative culminates in a showcase author event on 18th June, where lucky winners of a prize draw will meet Sir Lenny himself and hear more about his support for libraries and literature. 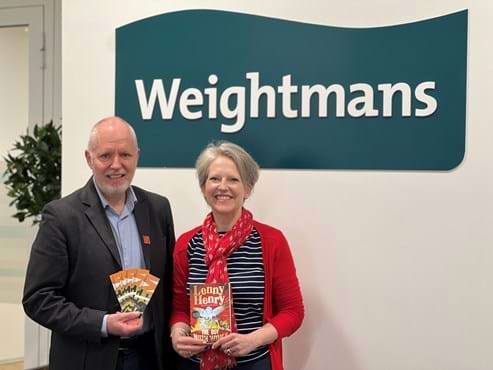 “Libraries play a crucial role in our communities, offer an escape and refuge to many providing a world of information, entertainment and education. As a free provision, it is therefore one of the most accessible, and we must preserve it for future generations.

“We are keen to invest in this preservation, and are delighted to support Manchester City of Literature. We look forward to welcoming Sir Lenny Henry to Manchester in two weeks’ time.”

"Last year's Festival of Libraries was a huge success: 78% gained new knowledge or skills, 44% said that it improved their wellbeing, and 39% stated that they will visit their library more often. We are delighted that Weightmans are joining with our public sectors partners including Arts Council England and Manchester City Council in helping spread the benefit of libraries to even more people in 2022."

Manchester was successful in its bid to join UNESCO’s worldwide Creative Cities network as a City of Literature in 2017. Joining 38 other Cities of Literature, a consortium including Manchester City Council, the Universities, Manchester Literature Festival plus a range of the city’s writers, publishers and literary organisations has formed to enable this to happen. Manchester City of Literature is a charity that manages the UNESCO designation on behalf of over thirty partner organisations. Our vision is to create an innovative, distinctive, equitable, globally connected city of reading and writing. We want Manchester to be a city where diverse voices are celebrated, creative talent and industries are nurtured and where literary activity changes lives.