Cohabitants who have never married or been in a civil partnership have increased from 2.8 million in 2002 to over 5 million in 2020.

The majority (61.3%) of the population aged 16 years and over in England and Wales were living as a couple in 2020, including marriage, civil partnerships and those simply living together.

Just over half (50.6%) of the population aged 16 years and over in England and Wales are either married or in a civil partnership. This amounts to around 23 million people.

There are five times as many people married who are aged 70 years and over than those who are married and under 30 years old. 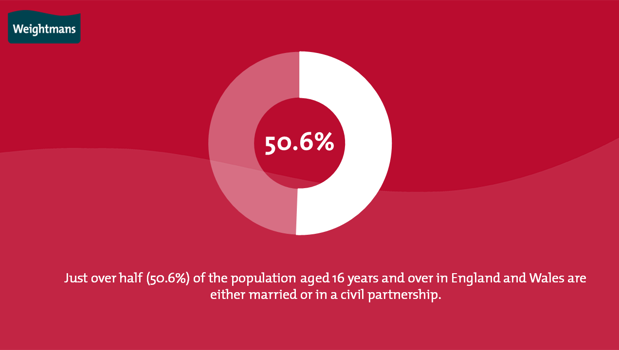 The number of cohabiting couples who have not married or entered into a civil partnership continues to increase. In 2020, 13.1% of the population aged 16 years and over were cohabiting. This amounts to over 6 million people compared to just less than 4 million in 2002.

The majority of people aged 55 years and over who are cohabiting have previously been in a legal partnership, i.e. marriage or a civil partnership.

ONS remind us that this data is for 2020 and an increase in cohabiting couples may be in part accounted for by postponed weddings and civil partnerships during the Coronavirus (COVID-19) pandemic. An estimated 73,600 weddings and same-sex civil-partnership ceremonies may have been postponed in England during the three-month period of lockdown restrictions between 23 March and 3 July 2020 alone.

Figures published by ONS in July 2021 tell us that the number of opposite-sex marriages has fallen by 47% since 1972.

Kanak Ghosh, Vital Statistics Outputs Branch, ONS said "Marriage rates for opposite-sex couples were the lowest on record in 2018, while the total number of marriages fell for the third consecutive year in a row. This continues the gradual long-term decline in both numbers and rates since the early 1970s.

"This is the fifth year since same-sex marriages have been possible and around one in thirty-five marriages are now among same-sex couples".

This long-term decline is likely to be as a result of more men and women delaying marriage, or couples choosing to cohabit instead, it added.

Cohabitants who have never married or been in a civil partnership have increased from 2.8 million in 2002 to over 5 million in 2020.

In 2002, around 50% of those couples were under 30. That figure has declined to around 38% in 2020 indicating that many older couples are choosing to live together rather than tie the knot.

However, many cohabitants do go on to marry and the ONS data shows us that more people are choosing to get married at older ages, particularly those aged 65 and over.

The myth of the common law spouse

It remains a popular misconception‎ that once a couple have lived together for two, five or more years they acquire the status of ‘common law spouses’ and, with it, financial remedies on separation if the relationship breaks down. This is wrong.

It is incorrect to say that in all situations a cohabitant in England and Wales has no legal rights in the event of a relationship breakdown, but the legal remedies are extremely restrictive and based solely on the law of property and trusts rather than any element of fairness/discretion as would apply on divorce.

Unless the couple start a family together, when a different legal regime applies to cater for the financial needs of any children (albeit the regime is not as generous as that on divorce), there is no obligation for one party to support the other with maintenance payments, and there may well be no recourse to any property/a home or pension.

The court is unable to consider the financial and housing needs of the parties and cannot take into account non-financial contributions to the relationship, such as looking after the home or caring for any children of the relationship. This can leave one partner extremely vulnerable if the relationship breaks down.

Pending law reform in this area, it is prudent for all cohabitees to consider entering into a cohabitation agreement if they have not already done so. Such an agreement can set out the couple’s intentions with regard to not only financial arrangements whilst they live together, but also the ownership of assets on separation.

If the couple decide to purchase a property together, they should always explore the possibility of a declaration of trust defining each partner’s share in the property.

As we have explored above, many couples later go on to marry or enter into a civil partnership, and so a pre-nuptial agreement should be considered in these circumstances.

Fiona joined Weightmans' family law team in 2015 as a partner with over 20 years' experience dealing exclusively with family law issues. Having practised in London with leading and innovative family law firms before relocating to Manchester, Fiona deals with matters for clients wherever they are based – whether in the North West, London or elsewhere in the UK and abroad.

If you need guidance on living together as an unmarried couple, contact our cohabitation solicitors.

Cohabitation agreements: steps you should consider when living together as an unmarried couple

What is the difference between civil partnership and equal marriage?