Highway Code changes 2022: what do they mean for motorcyclists?

In the last insight of the series we seek to address changes specific to motorcyclists within the newly established “Hierarchy of Road Users.”

Previous insights in this series have sought to highlight the impact of changes relevant to pedestrians, horse riders and cyclists. It therefore may come as no surprise that this piece will seek to address changes specific to motorcyclists within the newly established “Hierarchy of Road Users.”

Rule H1 of the newly updated Highway Code imposes the new concept of the Hierarchy of Road Users indicating: “Those in charge of vehicles that can cause the greatest harm in the event of a collision bear the greatest responsibility to take care and reduce the danger they pose to others.” The Code goes on to state: “The objective of the hierarchy is not to give priority to pedestrians, cyclists and horse riders in every situation, but rather to ensure a more mutually respectful and considerate culture of safe and effective road use that benefits all users.”

Differentiating themselves from the lower ranked groups, and in line with their standing within the new hierarchy, motorcycle riders are in charge of a mechanically propelled vehicle, and as such, are more likely to find themselves considered the perpetrator of a road traffic collision on account of their potential causative potency. They may also be at higher risk of a finding of contributory negligence when injured themselves. As highlighted in the preceding insight by my colleague James Mackie, the courts have historically recognised the hierarchy of road users under the guise of concepts of ‘moral blameworthiness’, ‘destructive disparity,’ and ‘causative potency,’ although these are now applicable to all road users in the absence of presumed liability.

As with cars, the status of a motorcycle can vary widely from a low powered moped to a high performance racing bike. Some motorcycles have the capability to accelerate very swiftly and travel at great speed, hence reducing response times for all road users. Alongside this, their less significant road presence when compared to a car, and propensity for their view to be restricted, can hinder both the rider and other road users’ ability to heed each other’s presence. This may also limit a motorcyclist’s ability to take appropriate action or respond as necessary to any situation which may arise. These issues can make motorcycles more difficult to observe, and give rise to more serious consequences as the result of a limited error of judgement.

There has been a degree of concern within the motorcycling community as to whether their status as a vulnerable road user has been a main consideration for the Department for Transport (“DfT”) when undertaking the review, particularly due to an absence of any representation during the consultation process, compared to the lower ranked groups. Referencing “accusations and vilification,” often aimed at motorcyclists in an article in MCN (Motorcycle News) dated 7 January 2022 the Motorcycle Action Group indicated: “We take no issue with moves to improve safety for other road users, but the systemic and sustained process of turning a blind eye to the needs of motorcyclists is unforgivable.” In response the DfT indicated: “The safety for all road users is at the core of our road safety strategy.” Regardless of this dispute, the changes clearly impact the manner motorcycles should be ridden in certain circumstances.

Despite the Government’s previous confirmation that presumed liability fell outside the scope of its consultation, the weighting which is given to helmet camera footage by prosecuting/determining authorities when motorcycles are involved in incidents with lower ranking road users will be interesting, as will the approach adopted by insurers and their advisors as to liability disputes.

On 25 November 2021 the UK Government Department for Transport (National Statistics) published a report entitled “Reported road casualties in Great Britain: motorcycle factsheet, 2020” . This report considered road traffic accident data between 2015 and 2020, and specifically the main trends in motorcycle usage and collisions involving motorcycles. It is pertinent that the preamble to the report indicates: “Motorcyclists are one of the vulnerable user groups. They are not protected by a vehicle body in the same way car users are, and tend to be harder for drivers to see on the road. They are, therefore, particularly susceptible to injuries.”

The main findings of the report taken over the said period were as follows: 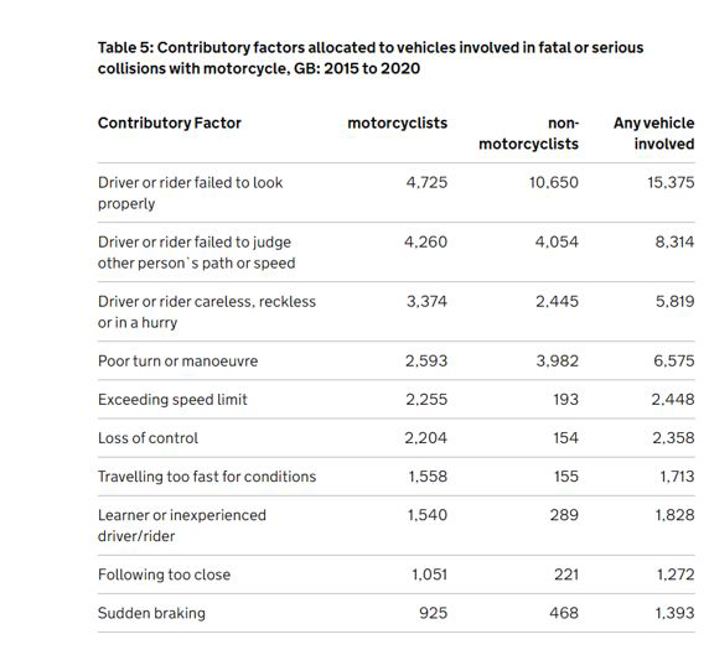 Table 4 of the same report provides a breakdown of road layouts at which accidents occurred in comparison to the severity of injury caused to motorcyclists and it is interesting to note that almost 70% of all casualties sustained injury at a T,Y or staged junction or not within 20 meters of a junction. Notably, 57.5% of fatalities occurred not within 20 meters of a junction, which would include overtaking manoeuvres and riders losing control, perhaps in response to the actions of other road users. Is there a risk that with new obligations to give way to pedestrians crossing at junctions, and reference to overtaking distances, this percentage could increase further? (see below) 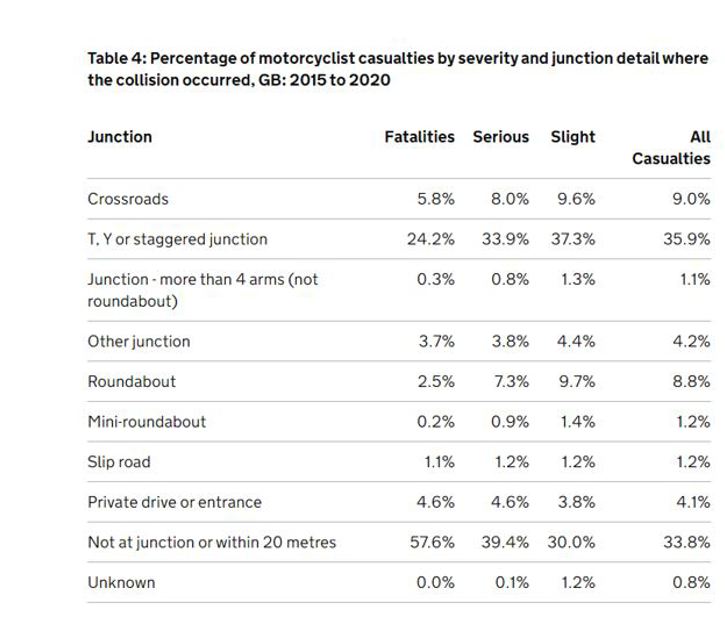 It is interesting to note the balance with which the Highway Code is interpreted in respect of motorcyclists, as against other vulnerable road users. The main changes relevant to motorcyclists are as follows:

1. Rule H1 - Road users who can do the most harm have the greatest responsibility

This has been addressed above and in the previous insights in depth. It is pertinent to note, however, that the principle is indicated to apply “most strongly,” to “drivers of large goods and passenger vehicles, vans/minibuses, cars/taxis and motorcycles“

This seems to emphasise the suggestion above that motorcyclists, who sit in the middle of the hierarchy pyramid are seen equally as potential perpetrator and yet vulnerable. This may be impacted upon by the size and specification of the motorcycle in question.

2. Rule H2: Situations in which pedestrians have right of way

This rule provides that all other road users, including motorcyclists, provide priority for pedestrians in the following circumstances:

Save for the first provision, the new rules are not a significant departure from the historic position. James has previously outlined the significance of the ‘should’ based rule, and Christina that Rule 8 emphasises the requirement for pedestrians to take responsibility for their own safety at junctions. Whilst the rule only extends to scenarios when a motorcyclist may be turning into or out of a road, this may present additional risk, particularly in circumstances when there is uncertainty as to the pedestrian’s intention, where the road conditions are unfavourable, and/or the view of the rider is restricted.

3. Rule H3: Not cutting across the path of other road users

“You should not cut across cyclists, horse riders or horse drawn vehicles going ahead when you are turning into or out of a junction or changing direction or lane, just as you would not turn across the path of another motor vehicle. This applies whether they are using a cycle lane, a cycle track, or riding ahead on the road and you should give way to them.”

“You should stop and wait for a safe gap in the flow of cyclists if necessary. This includes when cyclists are:

The changing of the rules emphasises an importance on appropriate speed, observations to heed the presence of other road users, and an anticipation of both the rider’s and other road user’s potential next steps. Motorcyclists and drivers will need to show patience in accommodating the additional protection afforded to those deemed more vulnerable, and ultimately to avoid collisions occurring.

Other important (non-exhaustive) rule changes that could impact a motorcyclist, with comment where appropriate include:

Further information on the changes can be found here. We will be providing training to clients on the changes to the Highway Code. For further information or to discuss how the changes may affect you, please contact Philip Nicholas.

Read our previous article on Highway Code Changes in which we consider what the changes may mean for pedestrians and horse riders, who are often the victims of road traffic accidents.

Read our previous article on Highway Code Changes in which we consider what the changes mean for cyclists.

Highway Code Changes 2022: What does it mean for cyclists?

Highway Code changes 2022: what do they mean for motorcyclists?