We take a look at expansion of the Pensions Regulator’s (“TPR”) “Moral Hazard” powers and the impact of new provisions.

The Pension Schemes Act 2021 received Royal Assent on 11 February 2021 and was incorporated into UK law.

Among a raft of changes introduced to UK pensions law, the most eye-catching are the expansion of The Pensions Regulator’s so-called “Moral Hazard” powers. These powers include a new range of criminal and civil offences and employers with defined benefit schemes need to take action now to ensure they remain on the right side of the law. These new powers are a reaction to recent pensions “scandals”, the most prominent of which related to Sir Philip Green and the sale of BHS for £1, a deal which failed to mitigate the multimillion pound funding deficit of BHS’s pension scheme.

Other measures in the Act include provisions relating to collective money purchase schemes, ESG investing, pensions dashboards and a consultation on a defined benefit code of practice. We will issue further guidance on these issues in future articles.

The Pensions Regulator’s moral hazard powers were introduced in the Pension Act 2004. These powers were designed to address the failure of individuals or companies to properly fund pension schemes of fail to safeguard assets. The two main powers are Financial Support Directions (“FSD”) and Contribution Notices (“CN”).

FSDs can be issued to companies within a group where one or more of those companies participate in a defined benefit scheme and the company or companies in question are unable to meet their funding obligations. The effect of the FSD will be the requirement for one or more of the other companies in the wider group to step in and meet these liabilities, usually over a period of time.

A CN can be issued against a company or an individual and this usually will require the target to top up some or all of a deficit in an underfunded defined benefit pension scheme. A CN will generally be issued where the target was a party to an action, series of actions or inaction, the main purpose of which was to eliminate or reduce a debt due to the scheme from the employer.

Many pensions professionals consider these existing powers, when used correctly, give The Pensions Regulator a wide ranging discretion to effectively police pension schemes, but the Pension Schemes Act nevertheless includes a new range of offences relating to pension schemes.

The new powers for the The Pensions Regulator are intended to allow a more pro-active approach to regulation, to ensure appropriate redress when things go wrong and to discourage negligent or reckless behaviour.

The Pension Schemes Act includes three new criminal offences and a new civil power to issue fines of up to £1 million. Additionally, The Pensions Regulator will have increased rights to oversee corporate transactions and will have wider information gathering powers.

The criminal sanctions are as follows:

The first two offences can be punished by a find and/or imprisonment for up to seven years. The third offence is punishable by a fine. 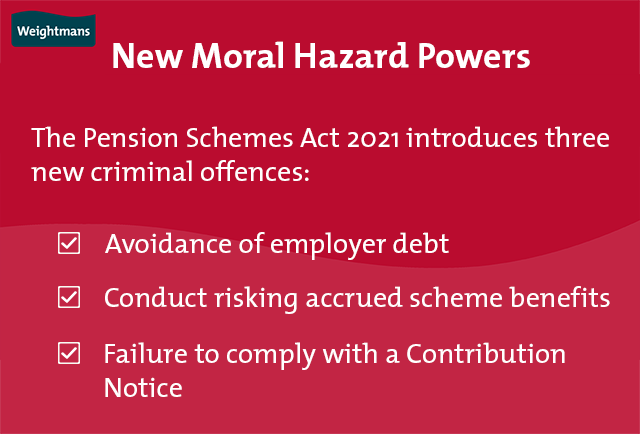 Those employers with defined benefit schemes must put in place protocols to avoid falling foul of the new provisions. The second offence listed above can be interpreted very widely, and a proactive approach by the board to ensure they are not risking scheme benefits will be needed. There is a concern with how this provision will be interpreted – could a poor business decision lead to a triggering of this provision?  What about professional such as scheme actuaries making assumptions which turn out to be unwise?

The other immediate impact to consider is that The Pensions Regulator may expect a seat at the table when there are corporate transactions involving a defined benefit scheme. How this would work remains to be seen.

Time will tell how the new legislation will impact on the day to day running of pension schemes. In the meantime, companies must proceed with extra care, and seek advice when required.

Mark acts for private and public sector clients on a wide range of pensions law matters including risk reduction projects, amending scheme documentation, the resolution of pensions disputes and the pensions aspects of corporate transactions.

If you require any further support in relation to pensions, contact our pension solicitors.