A corporate lawyer from national law firm Weightmans has provided legal advice to make the first Manchester monument to a woman in over 100 years a reality, as the statue of Emmeline Pankhurst is unveiled this week. The monument, chosen by the public, arrives in the same year that the country marks the 100th anniversary of the Representation of the People Act 1918, which gave some women over the age of 30 the right to vote.

The statue is the brainchild of the W♀Manchester Statue Project, launched to celebrate the significant role that women have played in the city of Manchester. Up until now, only one of 17 statues in the city is of a woman, and was unveiled over a century ago – Queen Victoria in 1901.

Following a public vote comprising of 20 leading women, Emmeline Pankhurst was chosen as the subject of the statue. A shortlisting competition for the sculptor saw 5,850 members of the public vote for their favourite design by sculptor Hazel Reeves.

Sarah Walton, Partner and Head of Corporate and Commercial at national law firm Weightmans agreed to undertake legal work related to the statue completely pro bono at the start of the project in 2017.

She worked on legal agreements relating to the sculpture and today, 14 December 2018, the bronze sculpture will be unveiled, coinciding with the day that some women in Britain were able to go to the polls for the first time.

“The W♀Manchester Statue Project is about celebrating the significant role that women have played in Manchester - Emmeline Pankhurst and the suffrage movement ensured a vital cultural and political change towards the equal rights we all benefit from today and I am so proud to play my part in bringing the first female monument in over a century to the city.

“I am delighted to have been approached to provide legal advice for this project and the legacy it will celebrate and leave for future generations; it has been a great project to be involved in and the final result is truly inspiring.” 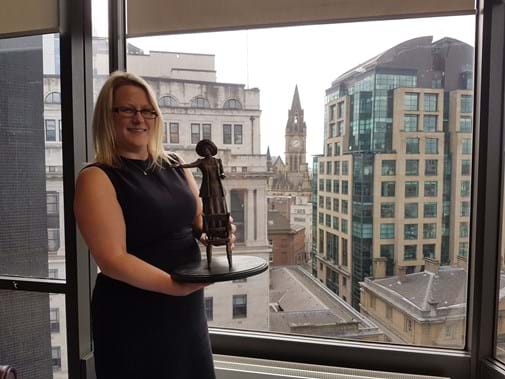 “Our Emmeline is not only a wonderful tribute to the life and work of Emmeline Pankhurst, but is also an incredible legacy to the suffragette movement and the role of Manchester’s women in campaigning for the vote.  That she should be unveiled exactly 100 years since the day some women first went to the polls and a few first stood as MPs in a UK election is especially poignant.  I hope that Our Emmeline inspires all those who are now helping to continue the ongoing journey towards achieving equality.”

Hazel Reeves, sculptor of ‘Our Emmeline’:

“I’m so excited that Emmeline will be rallying the crowds once more in her home city. It has been an honour to sculpt her and I hope I’ve captured Emmeline at her campaigning best, as the courageous, determined and dignified activist.”

“This has been a project that from the beginning has been driven by people, and so I’m delighted that the 14th December 2018 will be a coming together of people to celebrate both Emmeline and her legacy and the essence of Manchester, as a place of progression, inclusivity and ground-breaking ideas.”

This is the second statue that Weightmans has provided legal advice on in the last year – Partner and Head of Built Environment Karl Jackson recently gave pro bono advice to HOME Manchester in relation to the statue of philosopher Friedrich Engels which has been erected on First Street.

Maintaining steady cashflow - what do pharmacies need to know?

Substantial property transactions and the acquisition of non-cash assets